Do you remember seeing this?

When Ubuntu One was initially released, it contained a handy applet called, well, ubuntuone-client-applet. Here’s the picture of the latest karmic applet right click menu: 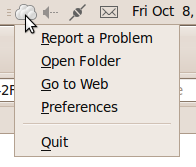 between idle and working states causing a ton of Your files are up to date notifications. It also had a very handy menu entry called “Report a problem” due to which Ubuntu One team started receiving bug reports about various Ubuntu components. It was very sensitive to DBus timeouts caused by slow syncdaemon startup (actually the root cause is bug 436612) as well.

It was decided that the applet has to go away and Ubuntu One should become as unobtrusive as possible.

Unfortunately, this brought a different problem. Luсid version did not contain any quick way to find the status of synchronization. Yes, ubuntuone-preferences could show current quota usage and the status, but there was no info about the number of files left to synchronize. So again, u1sdtool --waiting-meta and --waiting-content became our best friends. As a result, it is not possible to quickly find out whether all files are synchronized before shutting down your computer or disconnecting from the network.

So I thought that it may be a good idea to provide an independent implementation of the applet with all necessary features based on dbus interaction with syncdaemon and REST api and Application Indicators.

Please note that ubuntuone-indicator is not an official part of Ubuntu One project. This is not a full-fledged launchpad project yet but I plan to get to that pretty soon.

Here’s how it looks now for me: 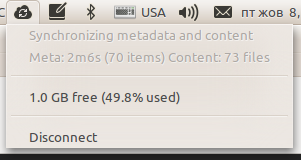 It turned out that the designers continued creating ubuntuone-client icons even though the applet was no longer there. So the first iterations of the indicator will use them. Later on I plan to add more icons to properly reflect disconnected state (no exclamation mark!) and an error condition (red cloud? )

Here’s the video that shows how that indicator works in real life together with automatic publishing feature described in my previous post:

And now the final question: where can you get it? Well, the early deb package is here – ubuntuone-indicator_0.0.1-0ubuntu1_all.deb on Ubuntu One. I should say that it is unstable receiving X BadMatch errors occasionally and my packaging skills are not yet as good as I want them to be. The source is available from launchpad bazaar branch: lp:~rye/ubuntuone-client/ubuntuone-indicator

If you are wondering about the title of the post… The cloud icon can be easily mistaken for a weather applet and we have at least one bug report that references our ubuntuone-client applet as ‘weather applet’. OTOH the launchpad example bug description ‘Weather applet crashed on logout’ might have contributed to this as well.

I was not really expecting this amount of interest for this project and I thank everyone who said they like this tiny indicator. Let’s make it awesome together!

Project is now published as one-indicator on Launchpad and ppa:rye/ubuntuone-extras now contains ubuntuone-indicator for Maverick Meerkat as well as Lucid Lynx. Please note that Lucid Lynx client does not show Metadata Queue size/estimate currently due to the fact that SyncDaemon does not provide that info but I have some thoughts about how that can be simulated.

Ubuntu Precise (12.04) update: The package has been rewritten and renamed, see this newer post on the brand new indicator.