Recently I found that an Atheros AR5BXB64 wireless card in my Acer Aspire One AOA150 netbook stopped working properly in 13.04 with 3.8 kernel. The problem was that any file download over the wireless interface had a high chance of being corrupted. I was not able to download updates - every time something big (like a kernel upgrade) got downloaded, I got the file, but the checksum did not match. The card was able to inject copies of previous buffers into the stream in a way that still passed IP and TCP checksum verification.

This was exactly the same symptom we had when Active State Power Management (ASPM) L0s was enabled for that PCI-E device, when the hardware itself was not actually able to handle this state properly. It was fixed in 2009 but suddenly got broken in 3.8 again.

I filed a bug (LP:1137513) and, since I had a workaround, I just continued using the netbook with a setpci call in rc.local until I was asked whether any prior Raring kernels exhibited this behavior.

I booted 12.10 from a Flash drive and found that the card was working properly there. Then I checked 3.7 kernels and found that the issue did not exist there and appeared only in 3.8.0-rc1, which suggested there was indeed a regression in the kernel. And the difference was that 3.7 and earlier kernels had LinkCtl: ASPM Disabled while 3.8+ had LinkCtl: ASPM L0s L1 Enabled in the lspci -vv output.

Since I was not able to find any relevant commits that looked like they were deliberately doing something to ASPM handling, the only way to proceed was to run a binary search. Since it was possible to check whether the bug was there or not just by checking lspci, it could and should have been automated.

Bisect works by splitting the commits between known good and known bad revision in half with every iteration and testing the commit in between. Rinse and repeat until you hit a commit that made the switch from good to bad and that's where the things broke.

I had to test 5840 commits, with roughly 13 steps (213=8192, 212=4096). 13 manual reboots are 12 reboots too many so I went on to set up an environment that would do everything for me. Additionally I did not want to build the kernels on that netbook itself as it is pretty slow. The build host and the netbook should have been separated if I wanted to finish the task in a reasonable amount of time.

So, here's the plan:

PXE is a Pre-boot Execution Environment which allows network boot without any local disk installation. It works by starting a DHCP client early in the boot process, obtaining the address of the TFTP server that hosts the boot images, downloading the image and passing the control over. TFTP is a Trivial File Transfer Protocol, a really simple connection-less and authentication-less protocol that's running over UDP.

In my case I already had a DHCP server which was running on my OpenWRT-based router. I set up a virtual machine and had my DHCP server direct the queries for the boot images to that virtual machine. This was added to my /etc/dnsmasq.conf on the router:

Then I switched to the "raring-server-i386" and installed atftpd.

The version in 12.04 suffers from a bug that prevents rlinetd from being set up properly. If you happen to hit the bug, you can create the configuration manually by executing the following:

In order to run Linux with PXE you will need to use PXELINUX. The required image, pxelinux.0 can be obtained after installing syslinux package from /usr/lib/syslinux/pxelinux.0. By default atftpd uses /srv/tftp as a root for the shared filesystem, so pxelinux.0 should go to /srv/tftp and be readable by nobody user.

Then I set up the netbook to boot from PXE. This will vary between different BIOS setup interfaces, but it boils down to enabling integrated LAN adapter, enabling boot ROM on that adapter and setting the network device as the first one to boot from. A wired connection to an IPv4 network is needed.

With pxelinux.0 in place I booted the netbook:

The line starting with "My IP address" is our pxelinux.0 working. Now we need to put configuration and kernel in place.

You can just grab the kernel and initrd from existing installation and put them in /srv/tftp. In my case I put kernel to /srv/tftp/vmlinuz and initrd to /srv/tftp/initrd.img. If you check /var/log/syslog on the TFTP server, you will see that pxelinux wanted to get the configuration from the following locations:

You can reboot your device now and you will see that the kernel is loaded, initrd.img is loaded too but the boot breaks since the root device is undefined. While you can put the root information from your grub configuration, we don't actually need to do that. As we are going to build our own kernel with minimal number of features, we will run everything from the intitial RAM drive, initrd. I put the panic=10 option so that the kernel reboots after 10 seconds in case it fails so that I would not need to shut the netbook down manually.

Well, that was easy. I grabbed the git repository of Linus, git://git.kernel.org/pub/scm/linux/kernel/git/torvalds/linux.git, checked out v3.8-rc1 and ran make menuconfig 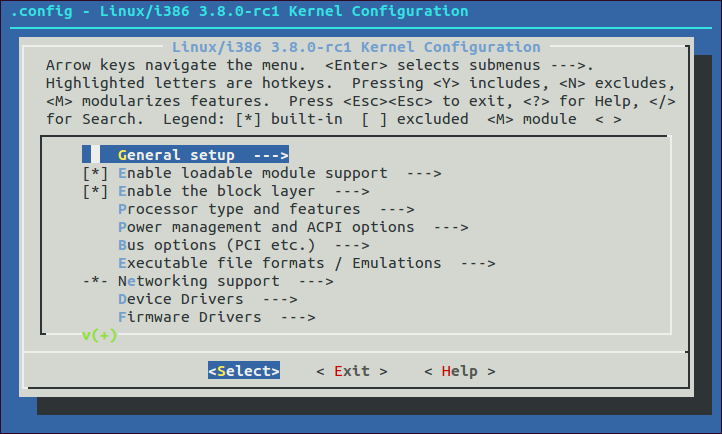 Since I was interested in ath5k module only I disabled loadable module support and made ath5k a built-in module. I left quite a few features I did not know/care about enabled which I believe has somehow increased the build time, but in the end it took 3 minutes to build a kernel on my VM with 4 concurrent builds (make -j 4, the VM had 4 CPUs allocated)

When kernel boots with initrd, it mounts that image as a root device and runs init as PID 1 trying /sbin/init, /etc/init, /bin/init and /bin/sh. In case /bin/sh is handled by busybox and it is running as PID 1, it attempts to run /init and /sbin/init. So I needed to create a new initramfs that had everything inside the /init script itself:

Here's what I came up with, the first part is stolen from /init that ships with Ubuntu:

So this init script configures the wired interface, sends the output of lspci to the host running the bisect script and listens to an incoming TCP connection on port 5555 so that it would reboot the host when connection is terminated. There is no need for anything fancier.

The initramfs contained the minimal set of applications and libraries, but you will want to grab busybox from a working system as it has a reboot applet which is missing from the version shipped with initrd by default on Ubuntu systems. I needed to do a bit of tweaking before I got everything working as I wanted so I had /bin/sh (symlink to /bin/busybox) originally in place of all these lspci calls. Also I used nc from netcat-traditional since it had less dependencies.

I called the script 'bisect-helper' and put it in my home directory on the VM.

The script needs to be tested manually first to check whether it is actually producing the results expected:

Yep, looks like it is working. Now let the madness begin!

It took ~64 minutes to run 13 kernel builds and the offending commit was discovered. I filed a bug, it got picked up by Yinghai Lu, who found that this commit triggered an issue in another function that differentiated between ASPM handling for non-hotplug and hotplug cases. This was affecting iwlwifi as well as other modules which were using pci_disable_link_state call, so it was a real issue.

Yinghai Lu has posted the patch to the kernel-pci mailing list and it should be merged at some point.

I've always wanted to do git bisect on something, but I had no idea what to start with. Bisecting is not specific to git, there's a Bazaar plugin as well and it is fairly easy to use this technique with any other VCS.

Minimizing the kernel build time is important. Originally I spent nearly 2 hours fiddling with the kernel configuration until I removed most of the things that were completely irrelevant to the issue being debugged. Having a powerful machine to build the software is a must in case the actual test needs to be performed on a slower machine.

Booting linux with PXE involves quite a few moving parts (DHCP, TFTP, boot image, kernel and initrd) that may take a while to configure, but all the time invested in this configuration will eventually pay off.