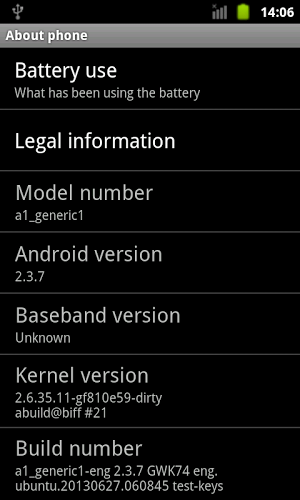 Well, I've reached my target kernel version, but it looks like there are a few issues to solve before 2.6.35 can be used with Android Gingerbread on Acer Liquid.

I was able to build and run: a Gingerbread distribution from CodeAurora Forum sources, but I haven't been able to get rild to cooperate. There are 2.3 ROMs out there with older kernel, so it is only a matter of time.

There is quite an issue with 3D drivers. It does not look like there are devices which run Gingerbread, have kernel with 2D/3D kgsl split and are powered by QSD8x50 chipset. I believe we will need to use pre-split drivers and see whether we like Nexus One (update: nope, uses different prelink map) or Sony Xperia X10 drivers more.

Wi-Fi does not work and crashes the device, I have a bug for that and a bunch of kernels in download queue to see how it gets handled in other devices carrying bcm4329 chip.

So here's the first build of 2.6.35 kernel/compatible userspace that I have flashed to my phone and it kind of works (no 3D, so no camera, no Wi-Fi, no top LED support). Sources can be found on GitHub - android-kernel-msm, android-msm-2.6.35-acer_a1 branch.