At the moment I am checking out other distributions after spending more than 5 years on Ubuntu and this week my Linux distro is Fedora 19. I am also interested in Tizen, so ability to run Tizen SDK on Fedora is quite welcome.

Tizen SDK is supported on Windows and Ubuntu machines only, but it is not really a big deal to get it working on Fedora installation.

First of all, install all the extra packages the installer wants you to:

It wants to use Oracle JDK, so after installing the RPM from Oracle web site you will need to set up the alternatives link (by the way, if you happen to find this link while searching how to set up Oracle JDK on Ubuntu, java-package is your friend):

Installer should work after this. I prefer downloading the sdk image and using it instead of re-downloading all the files via the installer itself. During the installation it should ask you to grant it superuser access to install kvm SysV init script (/etc/init.d/tizen-kvm) and udev rule file to configure permissions for Samsung development devices.

Ok, if installer has finished successfully you can now start the IDE, which... well, it won't work due to libsoup crash. The workaround is to add the following to ide/eclipse.ini:

Now the IDE starts, it still complains about MOZILLA_FIVE_HOME, it is not critical for now, but I would need to find out the real reason.

Creating a new VM will fail - qemu-img is linked to libcurl-gnutls.so.4, which is not present in Fedora. A dumb solution for this was to add a symlink in /usr/lib64/ to libcurl.so.4. While qemu-img could start, it looks like it's output is being parsed, and a message about version info gets in the way. I ended up symlinking tools/emulator/qemu-img to a system-wide /usr/bin/qemu-img. Our libcurl-gnutls.so.4 symlink still helps, because emulator-x86 is also linked against that lib.

Having done all that I got the Tizen IDE and emulator running on Fedora. 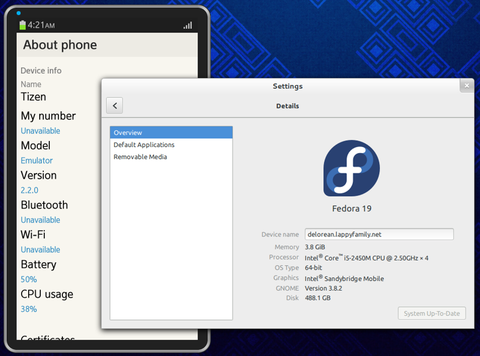